it was with great pleasure when the Misereor Sponsor Relation Team informed me in November 2013, that a huge donation was received on the forwarding account of our self help project for the people of Tamugh. The village with its 2500 inhabitants is situated in the Pokot district in western Kenya, which is plagued by drought and poverty.
There was no doubt: Your transfer included the correct purpose code W30793 Kikonot Water Project, that dedicates the donation to our project.
You cannot imagine the gratitude and expectations of my local project partner Martin Komongiro, who works as a catechist in Tamugh, when I informed him about the good news.
However, Misereor proposed to wait until the end of February 2014 with the release of the money, since there was no adress or further information about your enterprise mentioned by the transfer data. Consequently, we started to work with the money at the end of March.
Typically we run our project on base of donations coming from private people, church communities and our own savings. With your donation we received the chance to realize a quantum leap.
Together with the self help committee of Tamugh we decided to use your donation for the most needy families of the village, which in many cases are widows or widowers, who have lost their spouse by malaria. The typical living situation can be described by the example of Pauline Lomwai und her kids:

Her cottage is covered by grass and roots. During the rain season the family lives in wet condition, while they have no chance, to collect rain water from their grass roof to bridge the two long dry periods of the year. Pauline walkes several times per week with a little plastic shovel and a cansiter two miles to a low point in the nature, where the ground is wet. By digging deeper she can collect sandy water, which she carries home for the family. Since also the wild animals can only take up water at such places, they are often contaminated by the animal remains. Frequent deseases such as diarrhoea and typhoid are a common plague for the people. Since the family cannot collect water, they have no chance to start a vegetable garden.
Pauline and her older son are collecting fire wood for other families and receive some food as compensation. There are about 60 families in Tamugh, that live in such circumstances.

How does the donation of your corporation provide help for self-help to these people?
Your donation enabled us, to buy the hardware material for upgrading the living conditions of the first 21 most needy families on Martin Komgiro’s list of in total 60. After negotiating prices with several hardware shops in the town of Kitale (80km distance to Tamugh), Martin could order sheet metal roofings, timber, rain water containers, collectors, wiring mesh, watering cans and seeds for the 21 families.
As the next step the working team of the self help committee of Tamugh has started building a new house with tight roofing for each family. Wooden trunks and clay are taken without cost from the nature, while the timber is used for the underconstruction of the tight sheet metal roof. The following pictures show the build up phase of Pauline’s new house (May 2014): 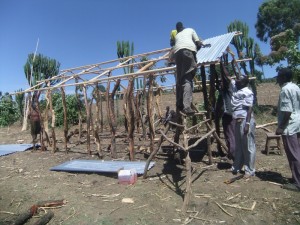 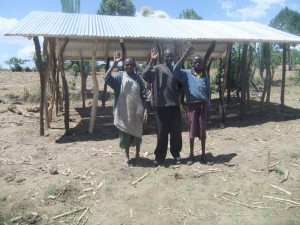 With the sheet metal roof it becomes possible for her to collect rain water. For that purpose she receives a 5000 Liter container, that will be connected to the roof collectors. In future the family will live from the much cleaner rain water, having first time enough drinking water available without need to dig and carry it home from distant places.
Furthermore, the collected water allows to establish an own vegetable garden, that will enrich the nutrition situation with much more variety on vitamins and minerals. Pauline receives from our program two rolls of wire mesh (80 meters), a watering can and seeds to start her family garden. In addition we provide her with the material to establish a big chicken cage to start a chicken culture. With these simple, but durable means Pauline can become self-reliant, based on own power.

Currently we are rolling out the described program on all 21 widows / widowers, that benefit directly from Luna Sol’s donation.

In April I received the following mail from my project partner Martin Komongiro on the progress of our program:
Hi Uli, yesterday i had a big meeting with beneficiaries. They were so exited with the great good news. One needy poor widow gave an overwhelming testimony and said “In the whole of my life I have never thought of having a tight iron sheet roof on my house, may God bless fully the donors“ and she shed tears. This week I’m meeting workers to help in the parrallel construction of the houses. I’m recruiting more workers and i support your idea of targeting 5 families in a month and if possible more.
What is clear to me is, I have to go an extra mile to do alot of co-ordination to make this big deal of improving peoples lifes get realized.

For each family we need an amount of 860 Euros (98.000 Kenya Shilling) to buy the required hardware material and to pay the workers.
Initially we planned to support more than 21 families from Luna Sol’s donation, but in May we changed our plan based on the following mail received from Martin Komongiro:

Hi dear Uli, the better houses project has earned us a lot of honour and respect because of choosing to help the most needy families.
Dear Uli, but we are currently faced with another big problem: Hunger, no food in most families. Here we have no rain, usually rain comes in April and people start planting crops, but none.
Now may be it is an idea I’m sending to you: If there could be people who would wish to support this emergency situation with food. 90kg of maize is currently ksh. 4000. We can support temporarily very needy poor families that, if the situation goes on like this, people can loose lifes because of not eating.
Sorry Uli,this is another issue that has come due to drought as we pray that rain will come. Best of luck.

We decided to buy 80 bags of maize to support the most needy families with food. We used own private savings, a donation from our church community and closed the remaining gap by dedicating a part of the Luna Sol donation for that purpose.
A bag of 90 kg maize costs 36 Euros on the kenyan market.
The money has arrived last week at the bank at Kapenguria (50km distance to Tamugh). The maize will be delivered and handed out to undernourished people later in June.

There has been no rain fall in Tamugh for the last 6 months with the consequence, that the sowing, which the families do as every year in early April, did not sprout. We hope, that we can bridge with this emergency support the time period until lasting rain will bring back fertility to the fields of Tamugh.

Later this year we will report here with more pictures about the progress of the house and garden  building program.

With new donations we plan to expand this program on the remaining families of Martin Komongiro’s waiting list.

I personally would be very delighted, if this page becomes noticed by Luna Sol Corp., who made the described progress possible.
I would like to encourage Luna Sol to use our contact adress   mail@afrikahilfe-tamugh.de   and provide us with a comment on how we used their donation. 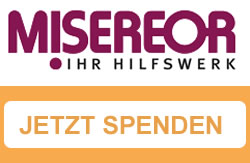